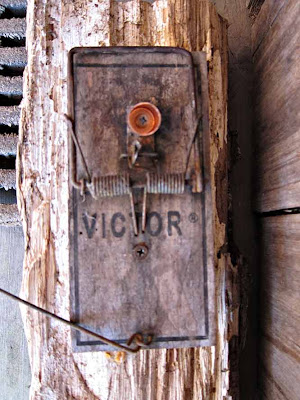 Rats will usually steal bait off the trigger without tripping the spring. I’ve been tying peanut butter wrapped in plastic to the trigger with Baggie wires, but it’s a hassle. Now I attach a half-inch copper pipe cap to the trigger with a sheet metal screw (grind down projecting end) and filling with peanut butter. Most of them are wood rats, not the awful Norwegian rats, but they need to be controlled, what with our wood piles and chic.

Pretty clever, huh? Well, I just went out and the fuckers had  somehow got the bait out of 3 of the 5 traps I set yesterday. Hmmm…

I wrote an article for Mother Earth News a few years ago on coping with homestead critters, but now I don’t feel so clever.

6 Responses to Outsmarted by rats

Home home on the homestead
Are You Lonesome Tonight