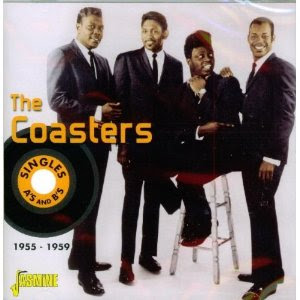 Been playing the ’50s Sirius station a lot lately. The vocal harmonies of that decade were unique. A few minutes ago, Elvis singing “Are You Lonesome Tonight,” so beautiful it gave me chills. The Isley Brothers doing “Twist and Shout,” Coasters (originally the Robins) doing all those great Lieber and Stoller songs. “Searchin’,” “Young Blood,” “Loop de Loop Mambo.” (The latter a little-known song with special significance for me: my roommate at Stanford was Richard Zanuck, now the uber Hollywood producer. One night (probably 1954), we were drinking at a party and about midnight decided to drive to LA in his 20th Century Fox Ford convertible. There’s a vast difference between San Francisco, my hometown, and LA. Things are a lot looser in LA (duh!) I was a wide-eyed northern foreigner. Things was hangin’ out down there. It was relaxed.

We got into LA around dawn and at a coffee stop, I saw for the first time, pieces of pie in the wall cabinet reflected by mirrors. Sheee-it! The visuality of LA.

As we pulled back onto the coast highway a little north of Santa Monica, we were listening to the great LA DJ Dick “Huggie Boy” Hugg and “Loop de Loop Mambo” came on. Another world. (I’ve loved LA ever since.)

I tried to find this song fore years, and just rediscovered it, like 55 years later on (and I recommend this CD if you’re into R&B, now called “Doo-wop,” of the ’50s:) The Coasters Singles A’s and B’s – 1955-1959 I’m playing “Searchin'” as I write this, and I’m 19 and we’re heading to Zanuck’s beachfront house with our Dale Velzy balsa wood surfboards. We’re both buffed and have full heads of hair…