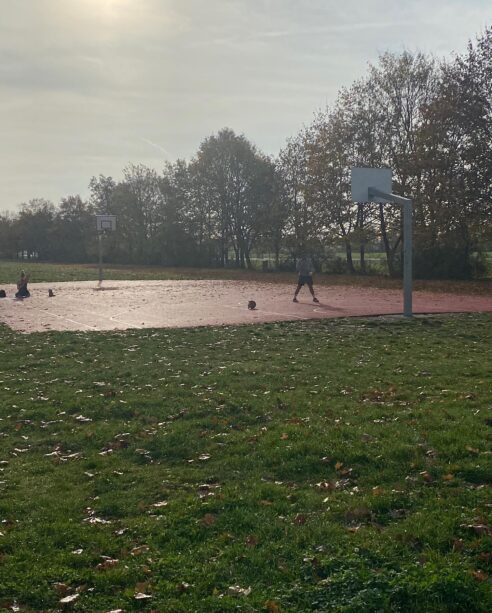 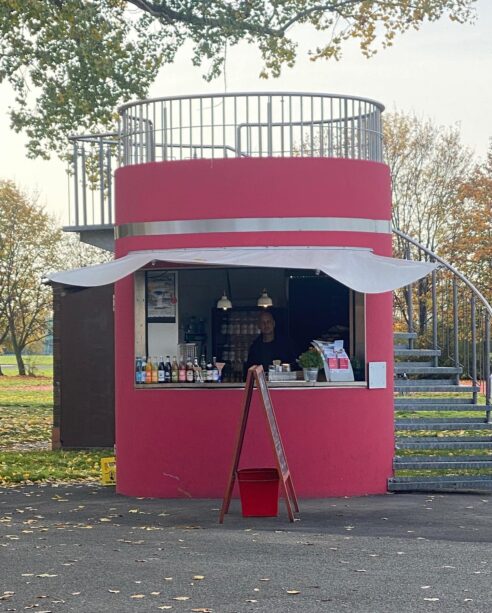 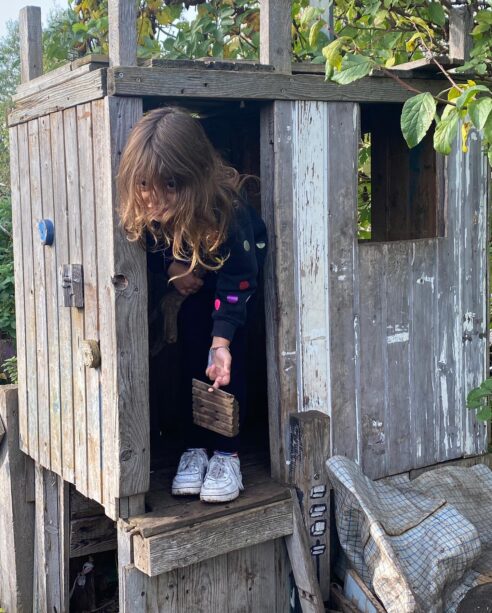 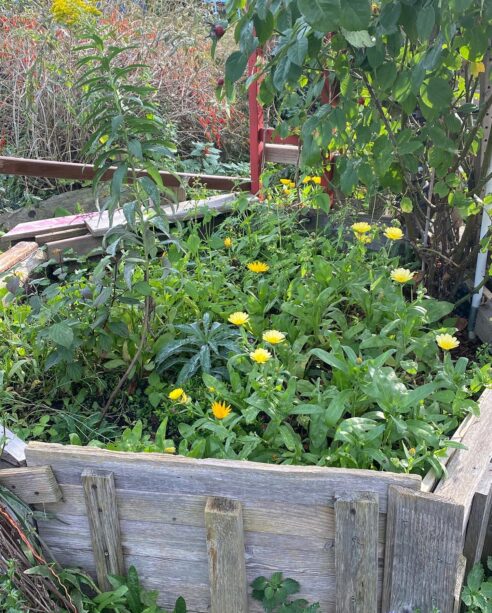 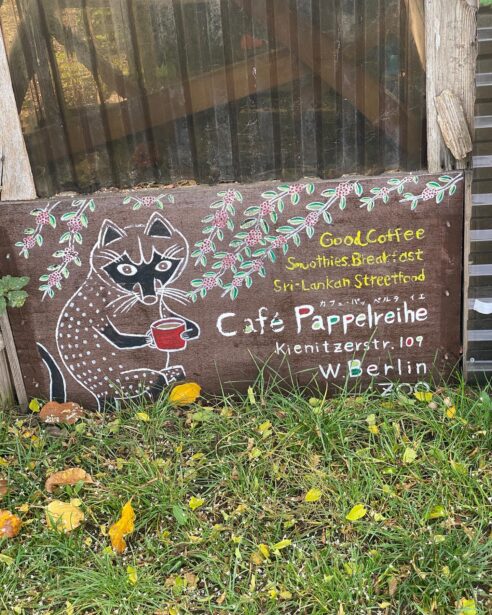 Last Saturday, Lukas, his fpur-year-old daughter Luna, and I walked over to the Berlin Templehof airport, which closed 14 years ago. The landing strip is intact and used by rollerbladers, skateboarders, cyclists, and runners. Lukas does a voiceover with the video here.

The Nazis did an enormous construction in the mid-1930s. The main building was once one of the largest buildings in the world.

On the perimeter are a series of gardens, shown here. Things look a bit bedraggled, since the growing season is over, but what a great idea: people growing their own vegetables in the middle of the city. 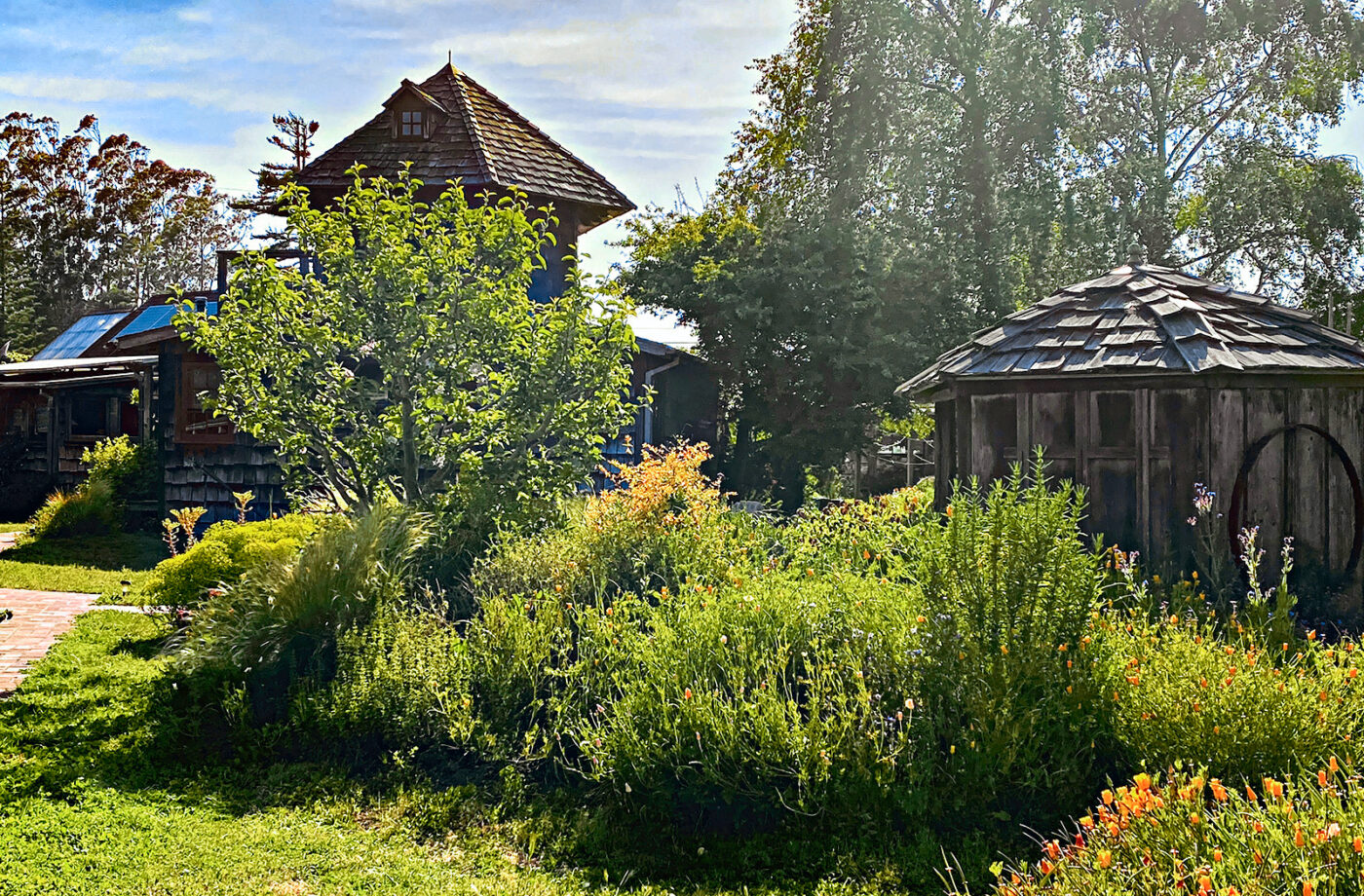 See our recent book, The Half-Acre Homestead: 46 Years of Building and Gardening

We spent a year salvaging the big door and over half the windows, which we designed the cabin around. The rest of the design was informed by our lack of capabilities and by the constraints and logistics of the site and property. The build then took another year.

The solar-powered cabin was 280 sq. ft. plus a 100-sq. ft. loft. The deck tripled our square footage with the intention of opening the two large doors most of the year. The redwood timbers and siding came from a neighboring sawyer and the interior was mostly plywood with exposed doug fir timbers. Shelves were made from slabs of madrone we milled — trees cleared from the cabin site.

A hundred feet down the trail was an outhouse and the weekend property, shared among friends, also featured a series of suspended tree decks, elevated outdoor shower, wood-fired hot tub, and host of camp activities.

Unfortunately, it all burned in the fires of 2020. Cleanup was a group effort and a minor amount of rebuilding has happened since then. We built a new outhouse and just this last weekend a tiny A-frame, just big enough for a bed for two.

This all started by finding two rusty cast iron wheels in the nettles whilst on a lockdown ramble during the Covid pandemic in January 2021. I had workshops sitting empty since retirement as a woodworker and was looking for a project.

I decided on a ‘Shepherd’s hut’ seeing as I had a partial starter kit. These were originally moveable temporary night shelters for a shepherd during lambing time on the higher marginal land of Scotland and northern England. The modern incarnation appears to be a lucrative Airbnb rental in which I have no interest, although addressing the chronic housing shortage for local young people does.

Our youngest son, Lewis, was due to return from Canada in the autumn and needed a place to live. That crystallized it. It was now April.

I started with the notion of using locally sourced and second-hand materials but the realities of the world markets were there from the start. Steel for the chassis, plywood internal walls, pine T&G exterior cladding, galvanized sheet for the roof, plus components, fixings, finishes and most of the rest. Only the sheep’s wool insulation and timber framing were local … and the rusty wheels. Two matching rear wheels were specially cast in England at eye-watering expense.

The chassis, 420 kgs of steel channel, was the only detailed plan drawing. The rest was make-it–up-as–you-go according to the dictates of found or bought components. 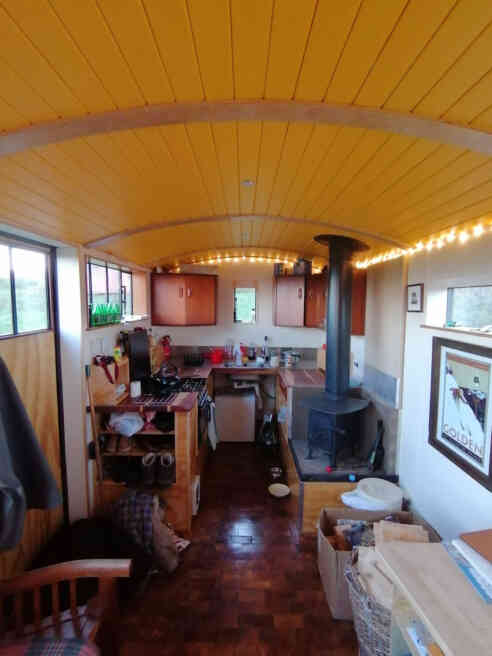 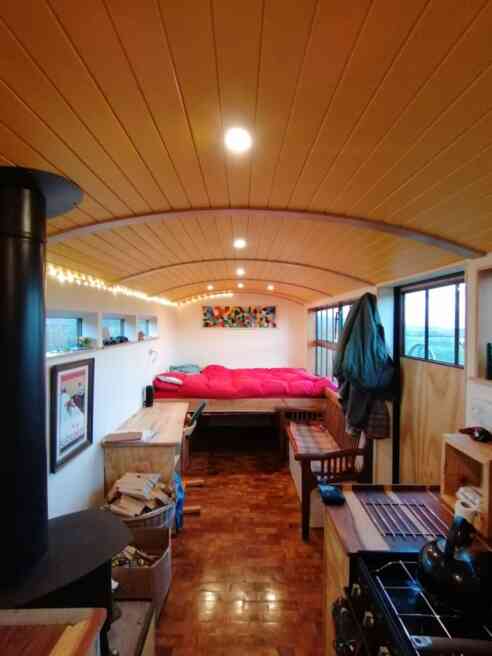 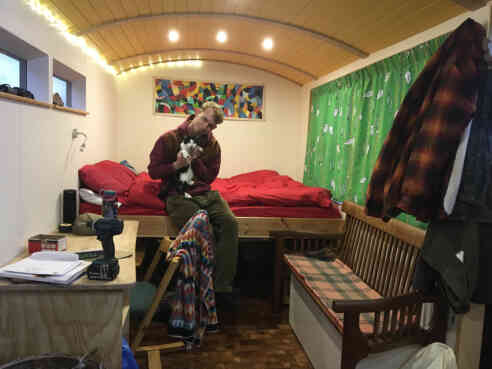 After four months of working alone, Lewis turned up just as the interior was getting a start. He’s a competent carpenter, so the pace picked up and we were finished by the end of October, 7 months since the first weld on the chassis.

Lewis and his cat now live in it locally. 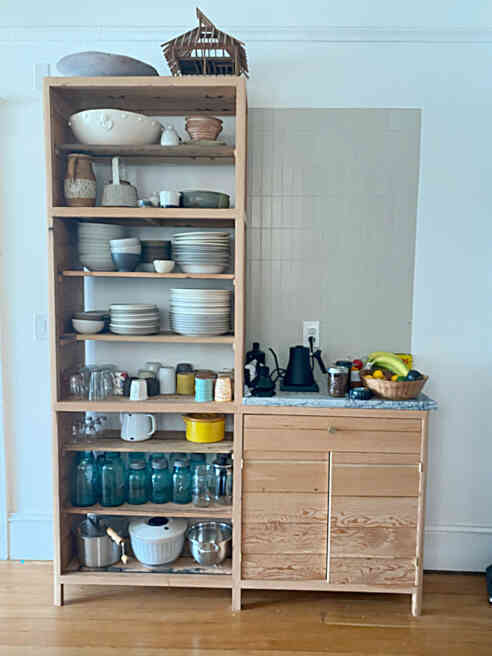 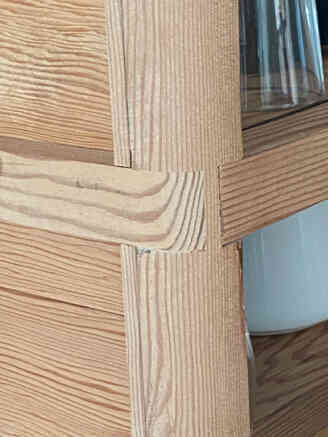 Article in The Guardian, words and great photos by Gabrielle Canon, Tuesday May 11, 2021

Homeless Oaklanders were tired of the housing crisis. So they built a “miracle” village.

Tucked under a highway overpass in West Oakland, just beyond a graveyard of charred cars and dumped debris, lies an unexpected refuge.

There’s a collection of beautiful, small structures built from foraged materials. There’s a hot shower, a fully stocked kitchen and health clinic. There’s a free “store” offering donated items including clothes and books, and a composting toilet. There are stone and gravel paths lined with flowers and vegetable gardens. There’s even an outdoor pizza oven.

The so-called ‘Cob on Wood’ center has arisen in recent months to provide amenities for those living in a nearby homeless encampment, one of the largest in the city. But most importantly, it’s fostering a sense of community and dignity, according to the unhoused and housed residents who came together to build it. They hope their innovative approach will lead to big changes in how the city addresses its growing homeless population.…

Now, roughly five months since they broke ground, a community has coalesced around the space that not only hosts events and workshops but also offers food, hygiene, and skill-sharing to the estimated 300 people who live in nearby encampments.

‘It is working,’ Schusterman says, smiling broadly. ‘This is the vision we had and it is working like a miracle.’

(I’m not showing photos due to copyright considerations.)

In 1968, I moved from Mill Valley to Big Sur and worked as foreman on a job building this house out of bridge timbers. The architect was George Brook-Kothlow. George had purchased all the bridge timbers from the town of Duncan’s Mills on the Russian River; they tore down the redwood bridge to build one of concrete, and George had hand-hewn 12 × 12 posts, 16-foot-long 6-by-16s and 16-foot-long 8-by-22s.

Carpenters Paul and Seth Wingate went down with me and we lived on the site, Rancho Rico, a 400-acre ranch with two private beaches. We remodeled some chicken coops for living quarters.

I spent about a year on the project. It was a struggle. We had to splice together two 8-by-22s for the 32-foot-long rafters, and lift them into place with a boom on the back of the ranch backhoe. There were 11 concrete pours for the foundation, each one coming 40 miles down the winding coast from Monterey. I quit after we got the building framed.

About 10 years ago, I went down for a visit. The family had moved into the chicken coops and they were renting the house for $13,000 a month.

Just built this cozy little wood shed in Trinity County California. All the lumber is salvaged, all the stone was gathered within 500′. The door handle is made from African coral wood and white oak I had from another project. The tin roof and windows were in a cache of reusable materials found on the old homestead. I believe the hinges were the only item purchased. 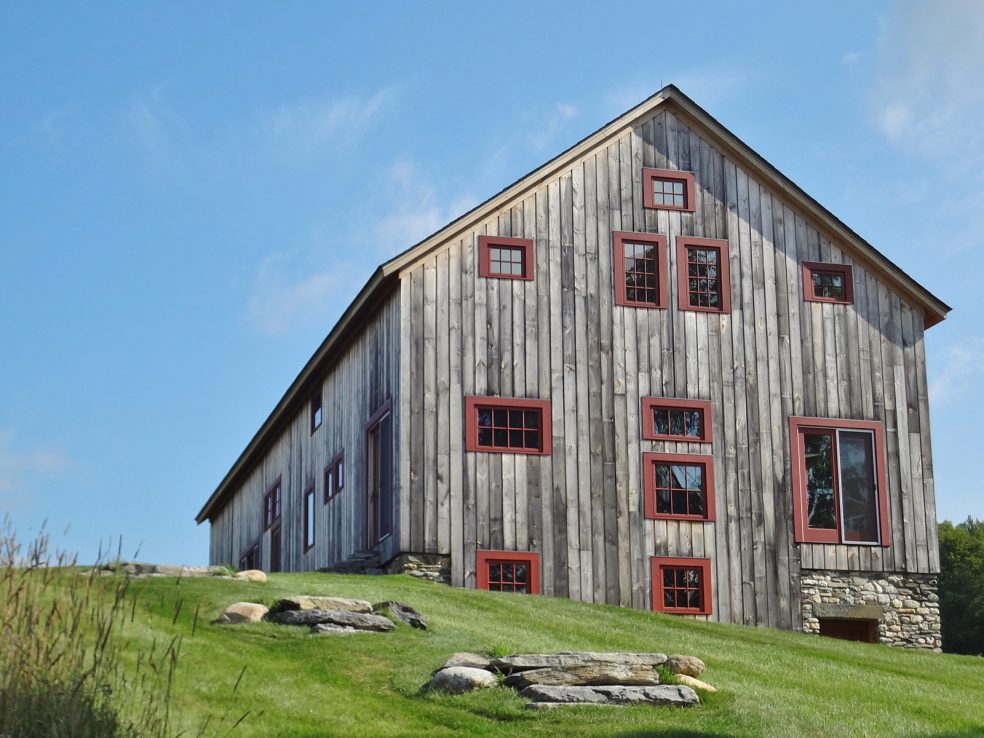 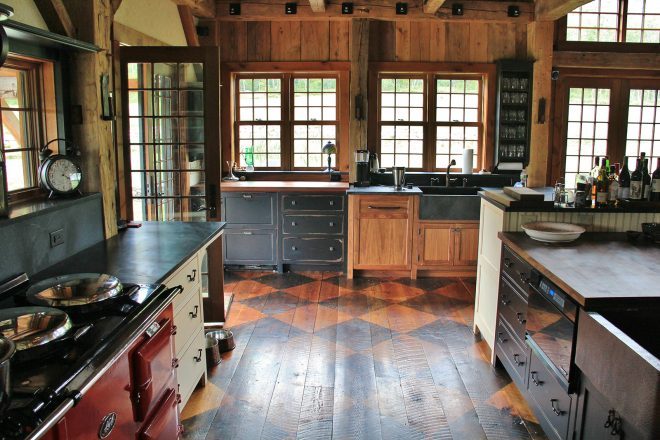 Last month, we received this letter:

I wanted to follow up on the email I wrote earlier this week about Luke Larson, a talented historic timber framer.

Luke is currently restoring a corn crib (and several other barns built in the 1700s.) I am sure that your readers would be fascinated by Luke’s outstanding craftsmanship. He would be able to share incredible insight about his techniques, the buildings he saves and the beautiful new timber frame structures he builds.

Let me know if you would be interested in an article.

Here is the article:

Green Mountain Timber Frames, a small company based in Middletown Springs, Vermont, specializes in transforming vintage, hand hewn timber frames into custom homes, studios, additions, and barns. Luke Larson now owns the company and operates it with a dedicated staff of craftspeople and history buffs. Luke is passionate about preserving the history that resides in old timber frame structures, and digs into the generations of folks who have built, cared for, and used these buildings. The structures undergo a complete restoration and are put back up on new foundations, ready to stand tall and true with integrity for many generations to come. Luke and his team are dedicated to preserving the craftsmanship from the past, as well as being students and teachers of the crafts of yesteryear. Take a look to see his current barns for sale.

I’ve been working on the shop and shop tools sections for the last few days.