I’m at Blenz Coffee in Yaletown. It wasn’t until I set my latte down that I noticed the barista art. How witty! I went over and gave the barista lady a mini book.

Last time in Vancouver I stayed at the Best Western Hotel on Drake St. Turned out to be right across street from The Yale Hotel, one of the best blues venues anywhere. New bands every night. A person could — if person wanted to — sit through a set, then at intermission retire to room across street, smoke a joint,and watch out window until band members went back in for the next set.

Again this year I lucked out in getting a room (out of 4 possible street orientations) facing the Yale. But to no avail, boo-hoo, as the Yale is closed for a year of repairs.

Here are a few photos. Cute little harbor tour boat, looks like the little boat that thought it could.

In an hour I’m going out with friends on a vintage tugboat for a harbor tour (in the rain). 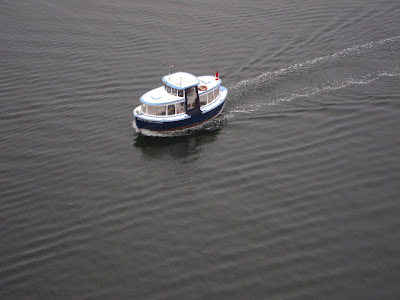 Lloyd Kahn started building his own home in the early '60s and went on to publish books showing homeowners how they could build their own homes with their own hands. He got his start in publishing by working as the shelter editor of the Whole Earth Catalog with Stewart Brand in the late '60s. He has since authored six highly-graphic books on homemade building, all of which are interrelated. The books, "The Shelter Library Of Building Books," include Shelter, Shelter II (1978), Home Work (2004), Builders of the Pacific Coast (2008), Tiny Homes (2012), and Tiny Homes on the Move (2014). Lloyd operates from Northern California studio built of recycled lumber, set in the midst of a vegetable garden, and hooked into the world via five Mac computers. You can check out videos (one with over 450,000 views) on Lloyd by doing a search on YouTube:
View all posts by Lloyd Kahn »
Tags: cities, music, photography