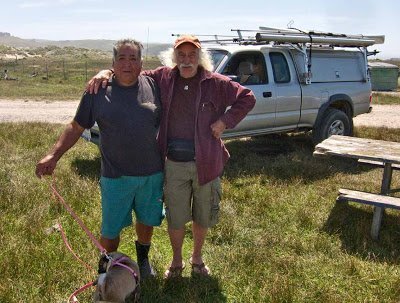 Last year I saw an article on clamming in our local West Marin Citizen. It showed a guy named Eloy Garcia and his clam gun, an ingenious device for getting horseneck clams. I’ve been digging clams off and on since the early ’60s. (Back in “the day,” we used to get Pismo clams by dragging garden forks in the sand at Rio del Mar, south of Santa Cruz.)

In this (sic) neck of the woods, there are horsenecks. There’s no shortage of them because they’re tough to get: you’ve got to shovel a lot of poundage of mud to get deep enough to where these critters hang out. The clam gun, however was like a surgical tool, pumping down through a 4″ hole to get the clams. 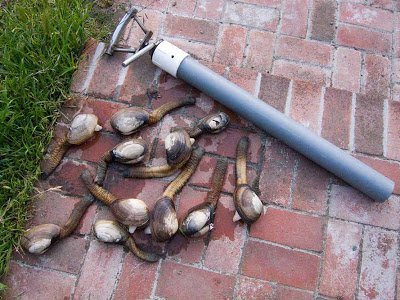 I tracked Eloy down (the stars were surely lined up because “Eloy” is “Lloyd” in Spanish), and called him up. He was really friendly and ended up sending me a spare clam gun in exchange for some of our building books. I talked to him several times about technique, but just couldn’t get it working right. Why don’t you meet us up at Lawson’s Landing, he said. They’d be clamming all this week.

I went up there Wednesday night and met Eloy, his wife Nancy, and two other couples and some grandkids, all camping out. You know how you meet someone, and you’re just on the same page? Well Eloy radiates good will. He laughs a lot. We all sat around his homemade (out of a 50-gallon drum) fireplace, drinking beer as the full moon came up in the east.

I slept in the back of my truck and yesterday we went out clamming early in the morning. I was pretty slow in picking up the technique, which involves crawling around in 3″ deep water, locating the clam holes under the waving eel grass, then pumping out the mud to get down to the clams. then reaching down with your hand (up to armpit) to get the clams. Eloy and his buddy Ron each had their limits of 10 clams, and I had one. They started helping me and I think I’ve got the hang of it. More or less.

Note: I’m going to publish photos of this wonderful little seaside community of funky trailers and campgrounds that is currently under fire by a group of environmental zealots. See: https://www.savelawsonslanding.com/

Lloyd Kahn started building his own home in the early '60s and went on to publish books showing homeowners how they could build their own homes with their own hands. He got his start in publishing by working as the shelter editor of the Whole Earth Catalog with Stewart Brand in the late '60s. He has since authored six highly-graphic books on homemade building, all of which are interrelated. The books, "The Shelter Library Of Building Books," include Shelter, Shelter II (1978), Home Work (2004), Builders of the Pacific Coast (2008), Tiny Homes (2012), and Tiny Homes on the Move (2014). Lloyd operates from Northern California studio built of recycled lumber, set in the midst of a vegetable garden, and hooked into the world via five Mac computers. You can check out videos (one with over 450,000 views) on Lloyd by doing a search on YouTube:
View all posts by Lloyd Kahn »
Tags: fishing