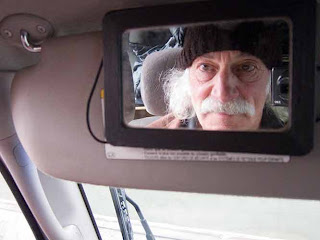 I’ve had the urge to communicate since my high school journalism class. Every day I run across wonderful stuff and I want to tell people about it. To the point of being a blabbermouth. Hey, check out this barn/motorcycle/red-shouldered hawk/beach…blah-blah-blah. To the point, where while I’m discovering something, I’m already thinking about communicating it.

Blogging is kinda perfect, a lot quicker than getting something into print. Right now I get something up at least once a day, it’s a necessary part of my day.

The biggest thing going on now, though, is my tiny homes book. I’ve been working 12-hour days maybe 3 times a week. Getting up early. I’m into it! I love the process, and the way this book is unfolding. New things are coming in almost daily. It’s wild. I’m putting it together 2 pages at a time, the parts are assembling and I’ve got over half the pages done and I’ll keep at it until we have a 224-page book.

It’s “organic” in the sense that it’s growing on its own. It fees like the same thing that was going on during production of Shelter in 1973. There’s a vortex , a cultural movement, in this case, of providing a roof overhead simply and cheaply, staying away from banks, using one’s own hands, simplifying life, at least for a while. Seeking independence. This morning, Louie, looking through the miniature printouts I brought along, said, “It’s gonna be like Shelter.” It’s going to resonate with a lot of people, especially women.

Only problem is it’s taking a long time. Communicating with all these homeowners and builders and getting pics that are hi-res enough. We’re aiming to have it out in winter 2011. It’s great for me to take a few days’ break and have fun with Louie.

Lloyd Kahn started building his own home in the early '60s and went on to publish books showing homeowners how they could build their own homes with their own hands. He got his start in publishing by working as the shelter editor of the Whole Earth Catalog with Stewart Brand in the late '60s. He has since authored six highly-graphic books on homemade building, all of which are interrelated. The books, "The Shelter Library Of Building Books," include Shelter, Shelter II (1978), Home Work (2004), Builders of the Pacific Coast (2008), Tiny Homes (2012), and Tiny Homes on the Move (2014). Lloyd operates from Northern California studio built of recycled lumber, set in the midst of a vegetable garden, and hooked into the world via five Mac computers. You can check out videos (one with over 450,000 views) on Lloyd by doing a search on YouTube:
View all posts by Lloyd Kahn »
Tags: on the road