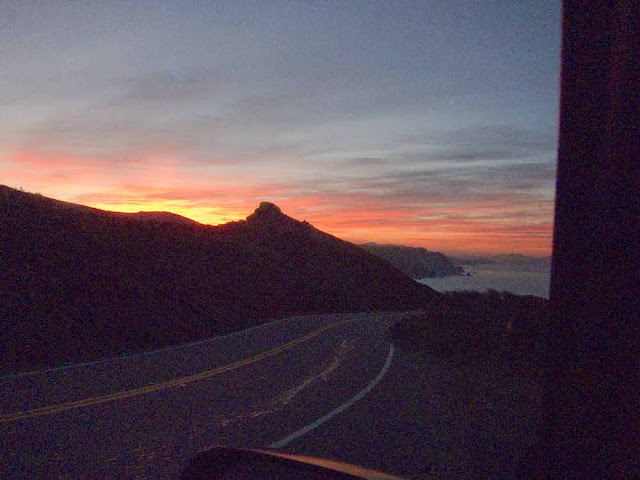 Took off at 6 AM for Berkeley today, meeting Kevin for breakfast at 9:30; I always come early to the Fertile Grounds coffee shop on Shattuck, with good latte and wi-fi. Catch up on news (read real hold-in-hand NYTimes).

Then this afternoon I’m shooting photos of a young woman who built her own $3000 tiny house in a friend’s backyard. Turns out there are a lot of women builders in our forthcoming tiny houses book.

Tonight I’m heading over the hills to the coast, to hang out with my friend Louie for a few days. I’ve got “my” little circular room in Louie’s shop, with wood stove and desk for writing. It looks out on grape vines and apple trees, with redwoods in the background. Gonna skate; there’s a half-mile downhill with v. few cars. I’ve recovered from operation and injury, good to be rolling again.

Lloyd Kahn started building his own home in the early '60s and went on to publish books showing homeowners how they could build their own homes with their own hands. He got his start in publishing by working as the shelter editor of the Whole Earth Catalog with Stewart Brand in the late '60s. He has since authored six highly-graphic books on homemade building, all of which are interrelated. The books, "The Shelter Library Of Building Books," include Shelter, Shelter II (1978), Home Work (2004), Builders of the Pacific Coast (2008), Tiny Homes (2012), and Tiny Homes on the Move (2014). Lloyd operates from Northern California studio built of recycled lumber, set in the midst of a vegetable garden, and hooked into the world via five Mac computers. You can check out videos (one with over 450,000 views) on Lloyd by doing a search on YouTube:
View all posts by Lloyd Kahn »
Tags: on the road, skateboarding

One Response to Off on short trip today