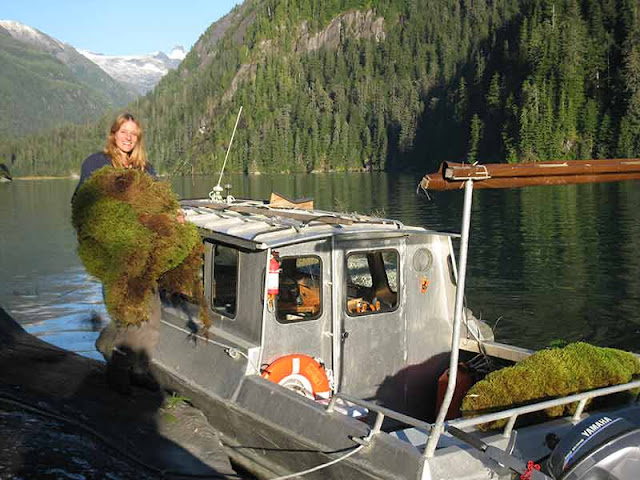 Dieter Klose was one of the featured builders in Builders of the Pacific Coast. He recently sent us photos of him and girlfriend Anne Lee collecting moss for a living roof in his boat out of Petersburg, Alaska. He writes: “It’s a renewable resource, and doesn’t house any creepy-crawlies, none that bite anyway.…”

They also collected bark, as a base layer, for moss food. I asked about the boat and location: “The best harvesting comes off of downed dead trees, and boulders, but low branches often have a good load, and even hold what we call “Boa’s”, which are about a foot wide, 6″ thick, and 4′ to 7′ long. They’re the best!…Location is at Scenery Cove, about 18 miles from home by water; total wilderness, although theres all likelihood they will put a hydro plant in that otherwise untouched cove.

The cruiser is custom made for me by a friend, of welded aluminum, and her name is FANG (named after my daughter, Wrenna, whos nickname is white-fang, or Fang for short).

The boat is 21ft long w/ a 150hp outboard, a double bunk, small settee and mini galley. Its a perfect rig for around here, as it goes up to 40mph, comfortably 30mph, as this is not the best place for sailing: too much or too little wind, with lots of tidal current.”

One Response to Dieter and Anne collecting moss in Alaska