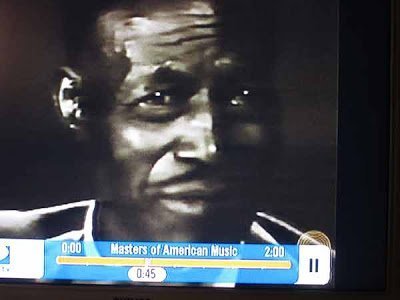 This is a wonderful documentary of the blues. Skillfully woven together, soulful, all good stuff. So many documentaries are frustrating, but this one gets it right. Robert Palmer’s comments are insightful. Some of the cuts are scratchy sounding, and there are traffic (or train sounds) during Albert Murray’s comments, but it’s all the real thing. It was on the Ovation channel last week. I just ordered the DVD (I rarely order movies these days). Photo at left of Son House (what a beautiful man!) ; he’s talking about musicians either playing for the Devil or God. Bessie Smith, Big Bill Broonzy, Sonny Boy Williamson, a young John Lee Hooker…I’m going to film a couple of segments and will post later on.

Before I was born,

You got a boy child’s comin

Gonna be a son of a gun,

-Muddy Waters in 1960 at the Newport Jazz Festival

One Response to Masters of American Music: Bluesland