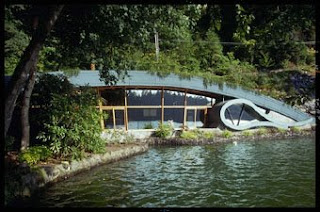 This seems to be my week of far-out architecture. This is the Gibson boathouse/studio, Lake Oswego, Oregon, designed: in 1993, completed: in 1995, by Oregon architect Robert Harvey Oshatz.