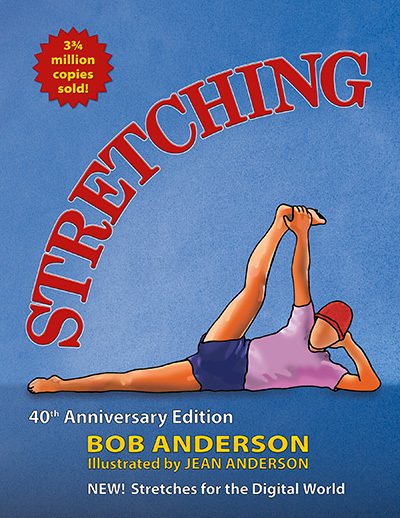 I discovered a homemade book called Stretching in 1979. It was aimed at athletes, with stretching routines for some 20 sports.

I wrote the author, Bob Anderson, and suggested he add stretches for builders, waitresses, truck drivers, kids, and older people. We started talking. I found out that he and his wife Jean (who did the drawings) had sold 35,000 copies from a garage in Southern California. End result: Bob and Jean rented a house on the beach here in Spring, 1980, and in three months, we did a complete revision of the book.

We did a first run of 50,000 copies, and the book took off, with Random House as distributor, and has been selling ever since; it’s now sold over 3¾ million copies worldwide, and is in 23 languages. As far as I can tell, it’s the best-selling fitness book in the world.

Tech Neck  An important (and timely) addition to this new edition will be stretches to combat the bad posture caused by (1) cell phone usage and (2) working on computers.

Take a look at how bent-over people are when talking on their phones. It’s called “tech neck.”

The point is, we all spend too much time at screens of various sizes, and it’s not healthy. Not good for the body.

How do we describe our world which is now filled with hours spent on screens?

Lloyd Kahn started building his own home in the early '60s and went on to publish books showing homeowners how they could build their own homes with their own hands. He got his start in publishing by working as the shelter editor of the Whole Earth Catalog with Stewart Brand in the late '60s. He has since authored six highly-graphic books on homemade building, all of which are interrelated. The books, "The Shelter Library Of Building Books," include Shelter, Shelter II (1978), Home Work (2004), Builders of the Pacific Coast (2008), Tiny Homes (2012), and Tiny Homes on the Move (2014). Lloyd operates from Northern California studio built of recycled lumber, set in the midst of a vegetable garden, and hooked into the world via five Mac computers. You can check out videos (one with over 450,000 views) on Lloyd by doing a search on YouTube:
View all posts by Lloyd Kahn »
Tags: computers, fitness, health, stretching, technology

7 Responses to The 40th Anniversary Edition of Stretching