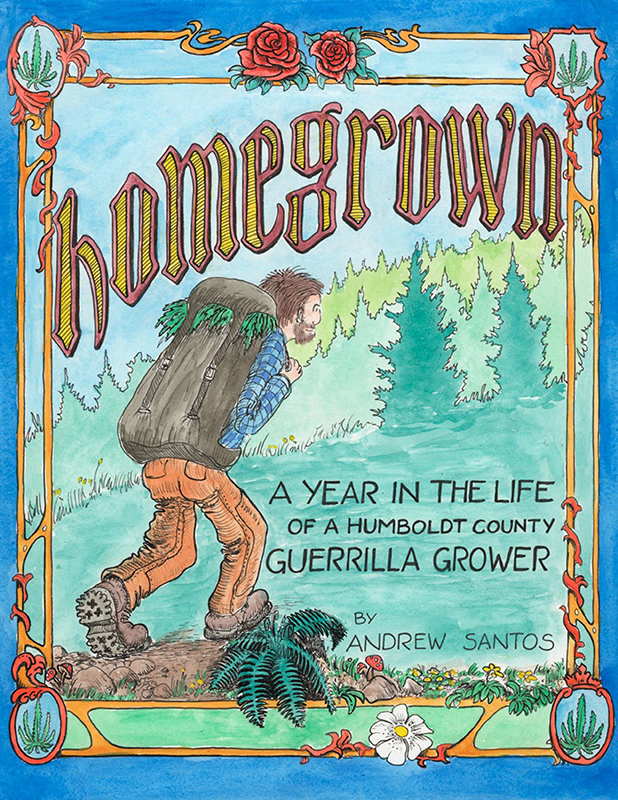 This is a great book. I found it so fascinating, I read it cover-to-cover. I’ve known growers for years, but never realized the full extent of what it takes (took) to grow out in the woods. It’s not only a book about farming, but about gardening, wildlife, plants and trees, and about treating the earth with respect.

Also, the drawings are great (see link below). Andrew told me it was about a year in creation.

Up until now, guerrilla growers in Mendocino and Humboldt counties produced organic, high-strength cannabis, grown without chemicals or electricity. Now things have changed. Yes, it’s become legal, but there are a host of downsides to the recent legislation. The 30 or so years of guerrilla growers hand-growing and homegrowing a clean product have just about ended, as Big Business has moved in. A lot of pot is testing positive for pesticides. People buy their organic produce at Whole Foods, yet don’t know if what they are smoking is laced with insecticides. How much are your lungs worth? Advice to pot smokers: Know thy grower.

Andrew’s book encapsulates the romance and righteousness of working with nature, and documents an era of wholesome cannabis production.

To get it (and to see some of the pages), go to: mollywestranch.com

Lloyd Kahn started building his own home in the early '60s and went on to publish books showing homeowners how they could build their own homes with their own hands. He got his start in publishing by working as the shelter editor of the Whole Earth Catalog with Stewart Brand in the late '60s. He has since authored six highly-graphic books on homemade building, all of which are interrelated. The books, "The Shelter Library Of Building Books," include Shelter, Shelter II (1978), Home Work (2004), Builders of the Pacific Coast (2008), Tiny Homes (2012), and Tiny Homes on the Move (2014). Lloyd operates from Northern California studio built of recycled lumber, set in the midst of a vegetable garden, and hooked into the world via five Mac computers. You can check out videos (one with over 450,000 views) on Lloyd by doing a search on YouTube:
View all posts by Lloyd Kahn »
Tags: cannabis, farming, gardening, homesteading, marijuana

4 Responses to Homegrown: A Year in the Life of a Humboldt County Guerrilla Grower