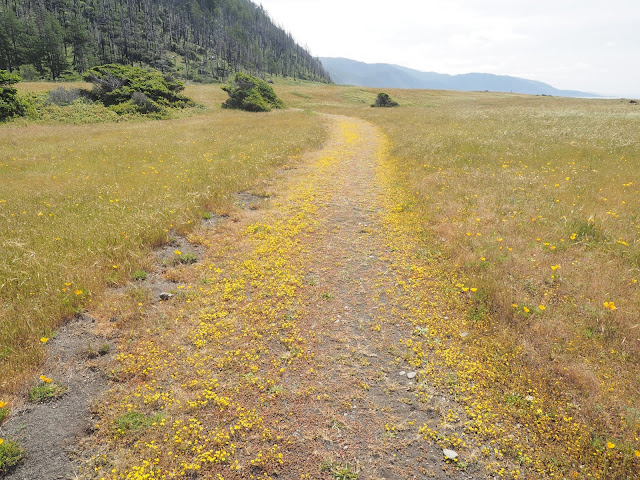 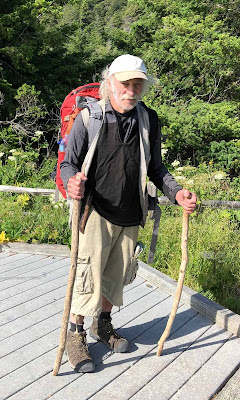 Set out at 8 AM after breakfast of granola with hot water and my last hard-boiled egg. Had to cross creek and I wasn’t about to try balancing on slippery log with heavy pack.

My technique: take off shoes, tie laces together, hang around neck, go barefoot across creek with my 2 bespoke driftwood hiking poles, v. carefully; slipping would be a disaster. Got across, dried feet, rebooted, was on my way.

Felt great — it was lucky that the fast-moving hiker the night before had told me how to get up on bluff trail; otherwise would not have seen it and struggled through beach boulders and deep sand.

Whoo! Walking on a trail was a cinch, and this one was lined with flowers. Fortified with almonds, chocolate, and 14-grams-of-protein Power Bar, numerous water stops, I made it through the 2nd high tide zone.

What I learned to do was rest before flat-lining. I stopped for 15 or so minutes, 4-5 times, resting near a creek and once, lying in the shade in a driftwood shack, to regain strength and then pushed on. I ended up walking for 8½ hours until pretty near exhausted, reached Shelter Cove around 5 PM.

Lloyd Kahn started building his own home in the early '60s and went on to publish books showing homeowners how they could build their own homes with their own hands. He got his start in publishing by working as the shelter editor of the Whole Earth Catalog with Stewart Brand in the late '60s. He has since authored six highly-graphic books on homemade building, all of which are interrelated. The books, "The Shelter Library Of Building Books," include Shelter, Shelter II (1978), Home Work (2004), Builders of the Pacific Coast (2008), Tiny Homes (2012), and Tiny Homes on the Move (2014). Lloyd operates from Northern California studio built of recycled lumber, set in the midst of a vegetable garden, and hooked into the world via five Mac computers. You can check out videos (one with over 450,000 views) on Lloyd by doing a search on YouTube:
View all posts by Lloyd Kahn »
Tags: adventures, beach, lost coast, surfing