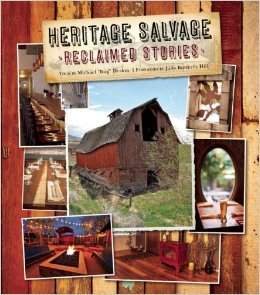 Michael “Bug” Deakin grew up in British Columbia, one of 10 kids in the family. He built his first house in 1970 out of used materials and these days runs Heritage Salvage, a large yard in Petaluma, Calif., filled with hand-hewed beams, flooring, barn doors, and all kinds of salvaged building materials. I love roaming around his yard. There are treasures there, as there are in this book.

He’s an irrepressibly dynamic, cheerful, funny guy (disclaimer: I know him) and this is a scrapbook of his colorful world and history. There are stories: building homes, gardens, furniture and movie sets (including for McCabe and Mrs. Miller), planting trees, tearing down old buildings all over America, a touching (and happy) tale of first meeting his daughter when she was 40 and their immediate rapport, of hanging out with Tom Waite…

He’s a dynamo for all good things and this a charming introduction to Bug’s World.

Lloyd Kahn started building his own home in the early '60s and went on to publish books showing homeowners how they could build their own homes with their own hands. He got his start in publishing by working as the shelter editor of the Whole Earth Catalog with Stewart Brand in the late '60s. He has since authored six highly-graphic books on homemade building, all of which are interrelated. The books, "The Shelter Library Of Building Books," include Shelter, Shelter II (1978), Home Work (2004), Builders of the Pacific Coast (2008), Tiny Homes (2012), and Tiny Homes on the Move (2014). Lloyd operates from Northern California studio built of recycled lumber, set in the midst of a vegetable garden, and hooked into the world via five Mac computers. You can check out videos (one with over 450,000 views) on Lloyd by doing a search on YouTube:
View all posts by Lloyd Kahn »
Tags: building, carpentry, ecology, recycling, salvaged materials