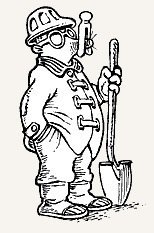 I got a robot phone call last night (around dinner time, of course): “Hello, this is not a solicitation, this is about your septic system…”

The object was to sell homeowners on additives that will “…improve septic tank digestion of solids.”

Don’t fall for this scam. Below is what we wrote in Septic Systems Owner’s Manual (There are 5 complete chapters from the book reprinted here, along with other septic info.). Click here.

Septic system additives, especially enzymes.
(You don’t need to add enzymes; they’re
naturally present in the sewage.) Beware of
telemarketers or ads hawking additives
claiming to avoid tank pumping. They
actually break down the scum and sludge
into small particles, which are then readily
flushed out into the drainfield, increasing
possibility of premature drainfield failure.
The State of Washington has banned septic
tank additives. In Tiburon, California, a
homeowner recently added enzymes to a
septic system that had been working perfectly
well. Soon after, sludge moved out into the
drainfield and the system failed.

I wrote an article that appeared in The Mother Earth News in 2008 about the sorry state of septic systems engineering and regulations in the US. To read it, click here.

Lloyd Kahn started building his own home in the early '60s and went on to publish books showing homeowners how they could build their own homes with their own hands. He got his start in publishing by working as the shelter editor of the Whole Earth Catalog with Stewart Brand in the late '60s. He has since authored six highly-graphic books on homemade building, all of which are interrelated. The books, "The Shelter Library Of Building Books," include Shelter, Shelter II (1978), Home Work (2004), Builders of the Pacific Coast (2008), Tiny Homes (2012), and Tiny Homes on the Move (2014). Lloyd operates from Northern California studio built of recycled lumber, set in the midst of a vegetable garden, and hooked into the world via five Mac computers. You can check out videos (one with over 450,000 views) on Lloyd by doing a search on YouTube:
View all posts by Lloyd Kahn »
Tags: homesteading, small homes