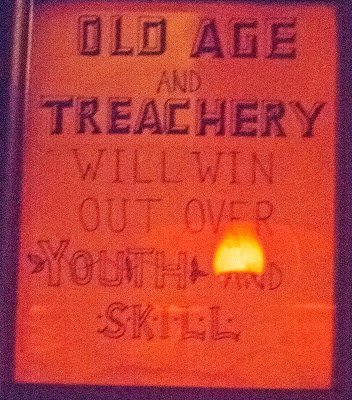 Several times, when I was maybe 11, my grandmother took me on what she called a toot. No, not that kind of toot. We’d take a streetcar down to Market Street (San Francisco), walk up and down past the movie houses,and then go to two movies, one after the other. A toot.

Thursday, my friend Louie and I went on a toot in San Francisco. Two old guys– 78 and 84 — country boys at that, in the Big City. I can’t believe Louie’s that old. He lives farther back in the country than I do, so the sights of the big city are a treat for him.

We went in early in the morning, first to Trouble Coffee, out by the beach. I showed Louie the v. cool restaurant Outerlands, just up the block from Trouble. Then we walked — sunny bright morning — over to Mollusc Surf Shop on Irving, a great place — surfboards, fine selection of books, wetsuits, surf clothes, then checked out the Cajun Pacific Cafe, with its colorful mural; unique restaurant. Then down to the big Flax art store on Market.

Then down to the now-hip Valencia Street neighborhood and Paxton Gate, store of skulls, skins, butterflies, stuffed animals, books and exotic plants. Walked along Valencia looking in store windows.

I was driving Lesley’s Mini and was it great! We’ve had it for maybe 5 years, and I’ve never done any substantial city driving. It zipped around elegantly. Quite a change from my Toyota 4×4 truck. I wanted to take Louie to some old SF hangouts, so we went to Swan’s Oyster Depot on Polk for lunch, and it was crowded to the gills. Too crowded, so we went to the down-the-stairs Chinese restaurant Woey Loy Goey, called by hippies in the ’60s Wooey-Looey-Gooey. Authentic Chinatown. Almost all Chinese customers.

We checked in at the Phoenix Hotel, called “The Rock & Roll Hotel” because so many musicians stay there when playing in SF. My fave SF hotel. An oasis in a bad neighborhood, 2-story, built around a pool, cool restaurant and bar. Rested up.

We caught a cab, went to North Beach, checked out City Lights, then across Columbus and had a couple of Cuba Libre’s at Specs bar, maybe my favorite such in SF. All kinds of great objects on the walls. Since it was uncrowded, we went around looking at all the artifacts. Then down to Tadich’s for dinner. Tadich’s has been around since the Gold Rush days. Crowded. Would be an hour’s wait, so we walked  up to Sam’s seafood. I had not been there since my insurance broker days, over 50 years ago. Walked in. Not crowded, looked exactly the same. White tablecloths. Excellent food, old San Francisco still intact.

Next morning great waffles at Pergamino on Columbus, then walked over to the South End Rowing Club and checked out the old wooden rowing shells, then across the Golden Gate Bridge and back to home sweet home.

Lloyd Kahn started building his own home in the early '60s and went on to publish books showing homeowners how they could build their own homes with their own hands. He got his start in publishing by working as the shelter editor of the Whole Earth Catalog with Stewart Brand in the late '60s. He has since authored six highly-graphic books on homemade building, all of which are interrelated. The books, "The Shelter Library Of Building Books," include Shelter, Shelter II (1978), Home Work (2004), Builders of the Pacific Coast (2008), Tiny Homes (2012), and Tiny Homes on the Move (2014). Lloyd operates from Northern California studio built of recycled lumber, set in the midst of a vegetable garden, and hooked into the world via five Mac computers. You can check out videos (one with over 450,000 views) on Lloyd by doing a search on YouTube:
View all posts by Lloyd Kahn »
Tags: cities, on the road

6 Responses to A Toot in San Francisco