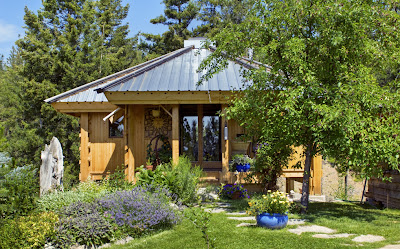 The Program: To design and build a furnished residence for a single person within a severely limited budget of $28,000 Cdn. complete, that at the same time had the spirit to exalt the human soul.

Even with such an extreme budget as this, it is possible to build an environmentally sound home that enhances the Joy, Life and Soul of humans.

A quote from the Architect’s recent book states “We are building sacred places, as distinct from profane places, to add layers of experience and importance to life patterns.…”

The architect is Henry Yorke Mann, in British Columbia, Canada.