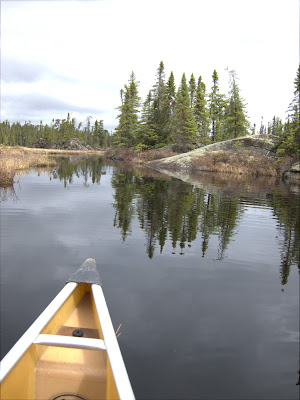 Yesterday Peter Henrikson, the timber framing master at the North House Folk School, took me out in a (40 lb. Kevlar) canoe into this water wonderland. I’d heard about it, but it sort of defies description. Now I know why they stay Minnesota has 10,000 lakes. We were out for about 6 hours, going from lake to lake, (Peter) portaging twice. We saw 5 bald eagles, two loons, beaver lodges galore, it was a great day. We had lunch sitting on a big rock. The silence is intense; not even airplanes flying over. We got sweaty after hiking a mile and jumped in a lake (momentarily). Bill, the outfitter, told us to check out a rock that looked like it could a dolmen, and here’s Peter checking out its underside. Glacier, or primitive humans?

I am having lot of fun! I did my seminar on the small homestead today and am the, ahem, featured

speaker of this 3-day conference on sustainability. I’m doing my Tiny Homes slide show and answering questions tomorrow night at 7:30 (brick oven pizza being served). I got interviewed on the local radio station today and it sounds like a local web TV outfit is going to film it tomorrow night.

Lloyd Kahn started building his own home in the early '60s and went on to publish books showing homeowners how they could build their own homes with their own hands. He got his start in publishing by working as the shelter editor of the Whole Earth Catalog with Stewart Brand in the late '60s. He has since authored six highly-graphic books on homemade building, all of which are interrelated. The books, "The Shelter Library Of Building Books," include Shelter, Shelter II (1978), Home Work (2004), Builders of the Pacific Coast (2008), Tiny Homes (2012), and Tiny Homes on the Move (2014). Lloyd operates from Northern California studio built of recycled lumber, set in the midst of a vegetable garden, and hooked into the world via five Mac computers. You can check out videos (one with over 450,000 views) on Lloyd by doing a search on YouTube:
View all posts by Lloyd Kahn »
Tags: adventures, birds, on the road, tiny homes, tiny houses