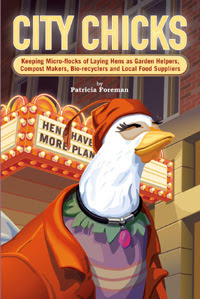 A bunch of good books for people getting into food production, on whatever scale: https://www.goodearthpublications.com/

“City Chicks describes in detail how chicken’s “skill sets’ can be employed in a ‘Hen-Have-More Plan’ for food production systems. Instead of using oil-based chemicals, chickens can help produce fertilizer and compost; they can turn yard waste into garden soil. Hens can also be used as mobile, clucking, (organic and non-toxic), pesticiders, herbiciders, and insecticides.

And chickens can be of civic service. One chicken eats about 7 pounds of food ‘waste’ a month. A few hundred households keeping micro-flocks of laying hens can divert tons of yard and food biomass ‘waste’ from trash collection saving municipalities millions, even billions of tax payer $$

‘What if a city had 2,000 households with three hens (or more) each? That could translate to 252 tons of food waste diverted from landfills each year … Add to that number the tons of yard waste (grass clippings and leaves) that can hens can help convert into compost and the amount is as enormous as the tax-savings of NOT having to handle, transport and store all that biomass waste’.”

Lloyd Kahn started building his own home in the early '60s and went on to publish books showing homeowners how they could build their own homes with their own hands. He got his start in publishing by working as the shelter editor of the Whole Earth Catalog with Stewart Brand in the late '60s. He has since authored six highly-graphic books on homemade building, all of which are interrelated. The books, "The Shelter Library Of Building Books," include Shelter, Shelter II (1978), Home Work (2004), Builders of the Pacific Coast (2008), Tiny Homes (2012), and Tiny Homes on the Move (2014). Lloyd operates from Northern California studio built of recycled lumber, set in the midst of a vegetable garden, and hooked into the world via five Mac computers. You can check out videos (one with over 450,000 views) on Lloyd by doing a search on YouTube:
View all posts by Lloyd Kahn »
Tags: farming, gardening, homesteading

Buddha was a cowboy…
April course in pre-fabs