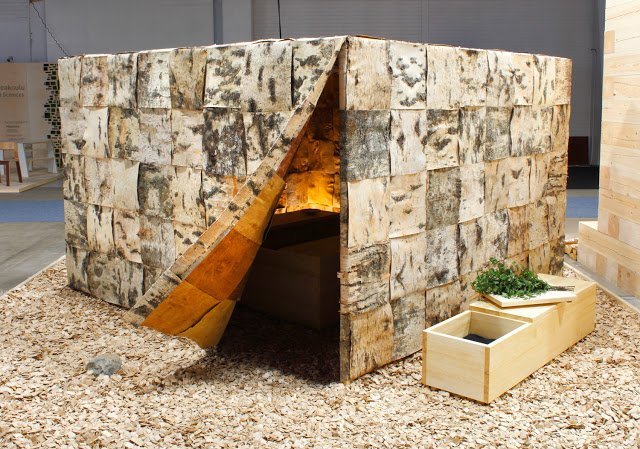 “Birch bark has been used in Finland for centuries as a construction material and as material for making small objects like baskets and shoes. One of birch bark’s features is good thermal insulation. The surface is water repellent and it can be gently washed with water. Some components of birch bark also protect it from decomposing.

Finnish architects Teija Losoi, Anne Varsamäki and Ilari Pirttilahti used the technique to build a lightweight sauna – basically a huge traditional birch bark basket turned upside down. The light walls are supported by a wooden structure that is hidden inside two layers of braided birch bark.…”

Lloyd Kahn started building his own home in the early '60s and went on to publish books showing homeowners how they could build their own homes with their own hands. He got his start in publishing by working as the shelter editor of the Whole Earth Catalog with Stewart Brand in the late '60s. He has since authored six highly-graphic books on homemade building, all of which are interrelated. The books, "The Shelter Library Of Building Books," include Shelter, Shelter II (1978), Home Work (2004), Builders of the Pacific Coast (2008), Tiny Homes (2012), and Tiny Homes on the Move (2014). Lloyd operates from Northern California studio built of recycled lumber, set in the midst of a vegetable garden, and hooked into the world via five Mac computers. You can check out videos (one with over 450,000 views) on Lloyd by doing a search on YouTube:
View all posts by Lloyd Kahn »
Tags: architecture, natural materials

One Response to Birchbark sauna in Finland