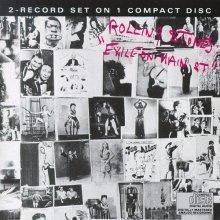 With all the recent publicity about the reissue of the Stones’ classic album, I realized I’d never owned it, so bought the new version. It’s tote-uh-lee great. Reminds me of the days when not a few of us dope-smoking drop-outs from polite society would vicariously strut along with Mick as he sang these incredible songs with his kick-ass band. Greatest rock and roll band in the world, you bet. Unique spin-off of deep and real American blues. I remember thinking that the English no longer control the world’s seas, but they have sure revolutionized music. How could white boys be so good?

I’m enjoying the heck out of it this foggy sunny morning, working on my tiny houses book. Here’s an anonymous comment on the album on Amazon:

“I came to terms with Exile when asked by a friend what I thought the five all-time greatest Stones songs were — songs that will still be alive 50 years from now. My response was fairly quick — Satisfaction, Gimme Shelter, You Can’t Always Get What You Want, Wild Horses, and Sympathy for the Devil. Just my opinion. But I realized immediately none were from Exile, which I think is the Stones’ all-time best album. Yes, Tumbling Dice and Happy are up there, and some cuts on Exile are, IMHO, absolutely awesome (viz their cover of Robert Johnson’s Stop Breaking Down) — but clearly Exile is not rich in standout hits. The whole is greater than the sum of the parts. Like few other albums, Exile is a world, a place I immerse myself in — a distillation of American blues and gospel and country and rock — a funky smokefilled bar or afternoon fishfry or steamy bordello, with beer and bourbon, pianos and slide guitars and hard-partying working people letting it loose, shining a light, shaking their hips, boogieing, scraping the sh*t off their shoes, rocking the joint all down the line.…”

Lloyd Kahn started building his own home in the early '60s and went on to publish books showing homeowners how they could build their own homes with their own hands. He got his start in publishing by working as the shelter editor of the Whole Earth Catalog with Stewart Brand in the late '60s. He has since authored six highly-graphic books on homemade building, all of which are interrelated. The books, "The Shelter Library Of Building Books," include Shelter, Shelter II (1978), Home Work (2004), Builders of the Pacific Coast (2008), Tiny Homes (2012), and Tiny Homes on the Move (2014). Lloyd operates from Northern California studio built of recycled lumber, set in the midst of a vegetable garden, and hooked into the world via five Mac computers. You can check out videos (one with over 450,000 views) on Lloyd by doing a search on YouTube:
View all posts by Lloyd Kahn »
Tags: music, the 60s

One Response to Exile on Main Street