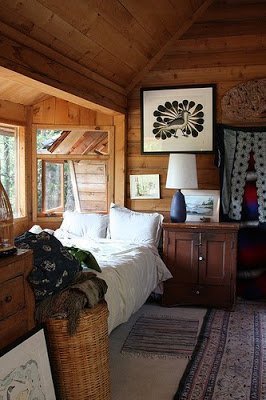 “In the US these houses are sometimes referred to as “Big Sur vernacular,” but usually here on the west coast of Canada we just call them handmade or handbuilt houses, vernacular architecture, or hippie houses. They’re pretty common in British Columbia, most famously on the Gulf Islands between mainland Vancouver and Vancouver Island, but they exist everywhere. This particular house was built by hand in sections beginning in the late 60s, on a dry granite hill just above a lake. The piece of land was cheap at the time, and the house was built for almost nothing. The owners were artists at the time and had virtually no budget, so most of the materials were salvaged or bartered, and since the place was built with the help of friends there were almost no labour costs.…

One of the best things about the house is its smell. The milled cedar boards that clad almost all of the walls give off a kind of perfume. I’ve never been in a city house that smells that way, though I guess it’s possible.…”

Blogger Lindsay asks that no one re-posts this photo or any from her blog, due to the privacy desires of the owner/builders. (She gave us special permission.)

One Response to Great blog from British Columbia