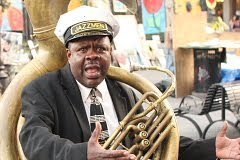 This is a companion website for the book Sidewalk Saints: Life Portraits of the New Orleans Street Performer Family: https://www.sidewalksaints.com/bands/51-mark-qtubaq-smith

(Sent me by Rick Gordon)

“I get back to New Orleans, they had agencies was giving away instruments to all the musicians. Everybody getting brand new horns, but me and a brand new horn, oh no. A new horn you gotta nurse it like a baby. The horn gotta grow up with you. I ain’t got time for that shit. I said let me get this here tuba, some forty years old, donated from Wichita, Kansas. Everybody saying, Tuba what’s wrong with you getting that old horn? Let me tell you something, ain’t nothing like a horn that’s ass done been whipped and beat up on. That way before the horn can beat me up, I’m beating up on the horn. It’s gotta have the seasoning, the flavor. Just like frying chicken. You can’t fry no chicken unless that skillet been seasoned. See, with chicken they got something called Tuba’s chicken, you know my momma and daddy done taught me. And that’s the best damn chicken. Now, I could tell you how to make Tuba’s chicken, but you go home and your chicken ain’t gonna taste the same. Why? Cause you ain’t go the same pot. Your pot ain’t been seasoned. See, me and my music done been seasoned. I gotta have me a horn that got the same flavor…”