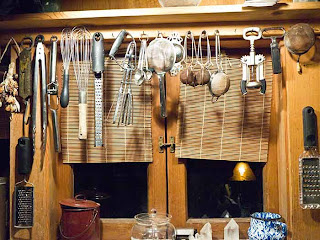 A one-inch strip of wood, a bunch of nails, a hammer and—voila!—dozens of frequently-used kitchen tools hanging within easy reach. How come you never see things like this in Dwell or Fine Homebuilding?

On the Beach Yesterday
Mark Morford On Burning Man 2009