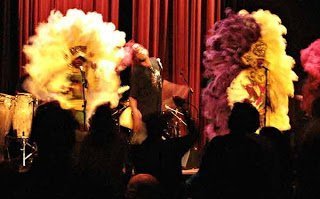 The Wild Magnolias have been around since the ’50s. Since I was in SF Monday night I went to see them at Yoshi’s. I wish I could say they were good, but they seemed mediocre in spite of the gorgeous feathered costumes. Ah well, you just never know what live music will be like. By the way in Yoshi’s lobby, there is a fascinating display of the Jewish roots of the Fillmore district, which predates the black culture of the Fillmore from my high school years. Yoshi’s is at 1330 Fillmore at Eddy and has almost always got great musicians.