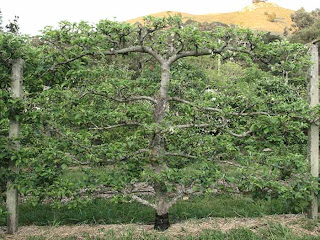 The garden at the San Francisco Zen Center’s Green Gulch Farm was started years ago by Alan Chadwick, an English gardener who left behind a wonderful legacy of gardeners and gardens (including the farm at UC Santa Cruz). There’s a row of these espaliered apple trees. If you’re a gardener living in the San Francisco area, this is a wonderful garden to visit. I believe they’re open to the public on weekends.

One Response to Espaliered Apple Tree