This story begins last week when I came into the little port town that is gateway to the jungle paradise where I’ve been hanging out. It’s a dusty Central-America wild-west-feeling little place full of backpackers and pretty cool Costariccenses. I was getting a beer at a popular open-walled main street (if you can call it that) restaurant, and an old bum was sitting on the steps, mumbling to everyone who entered, In a while, a spiffy worked-on Toyota truck pulled to the curb. The driver moved fast, like an athlete, bit of an edge. Shaved head, looked tough. He noticed the old man, went over, bent down and talked to him. Then he took the guy’s arm and very gently helped him get up. It was a tender thing. He got him in the truck and took off, to return a few minutes later, obviously having deposited the guy at home.

Flash-forward to today when I came back into town, this time on my way southward to Panama. I’d heard of a fantastic treehouse 8 miles north of town. I saw the same cabbie and yes, he knew where the treehouse was, and since I had the afternoon free (ferry across the bay tomorrow), we headed out to the treehouse. The cabbie’s name turned out to be Elias Garbanzo. The old man turned out to be penniless, without enough to eat. We headed out into a very different countryside from the beach/jungle. Lush and agricultural. Elias rattled off the names of at least a dozen trees. When we both looked over at a sweet little Tico house under some palm trees, Elias said, “pura vida.” Yep.

We got to the treehouse and it was a stunner. Centered around a huge tree, which it is not attached to in any way, must have 5 stories, and is maybe 60′ high. All built of local sustainable wood. Michael Cranford, the artist/builder, happened to have a well-worn copy of Shelter, and knew who I was and graciously showed his uninvited guests around for an hour. I’m actually happy when I’m working in my travels. Here are a few pix, which don’t really do it justice. Wish I had my big Cannon with me, lenses and all.: 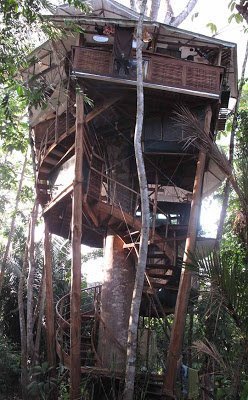 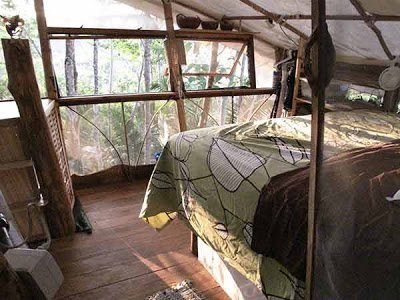 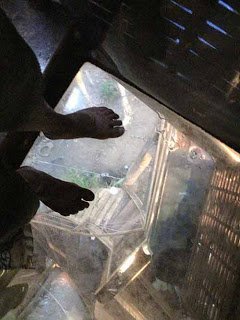 Right, O ye of little faith: the clear plexiglas shower floor looks 50′ down to the ground and yes I did hold on to the handy handle while gingerly stepping on to it. I will do anything for a picture.

Hey, now we’re cookin. I shot these pix about 4 hours ago, had dinner in town, and am now sipping on a tequila at a v. cool water front cafe with DSL connection. Lugging all this digital equipment around is stressful (in weight and in worry about rip-off), but it does give me Photoshop and transmission capabilities way beyond internet cafe postings.