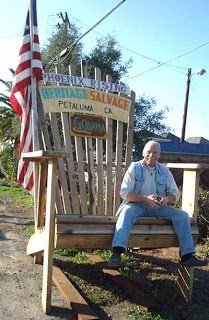 Michael “Bug” Deakin at his Heritage Salvage company in Petaluma, California. I just discovered this place last week. They have all kinds of reclaimed lumber, doors, windows columns. handcrafted furniture and slabs https://www.heritagesalvage.com/