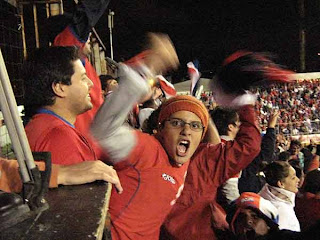 We ended up spending 5 days in the city, going to the soccer game between Costa Rica and Honduras Wednesday night, a world cup game between two fierce rivals. We sat in the end zone, Chilon bought a crazy Tico hat, and partied with everyone within range of his voice. There were maybe 35,000 fans, of which maybe 5000 were Hondurans. I’m not a soccer fan, in fact I don’t really watch much of any sports these days, but this was an experience to be in the midst of screaming crowds. Ticos insulted Honbduras — the country and the players —all night lobg, chanting:

The players were in such fabulous shape. I loved watching the stretching and warmup, their grace and strength (and in the game, endurance). I like the facts that they’re not giants, like football or basketball players. They’re normal sized humans with extraordinary athletic skills. Each time CR svored, the stadium roared like a lion amplified.

Merriment in Every Cab Ride
Into the Jungle