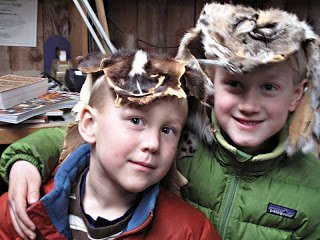 My two youngest friends, Jonas and Sasha Plichta come to visit every once in a while. They are passionate about the natural world: bones and feathers; butterflies and mushrooms; whatever moves, or dies, or is observable in the natural world. For years I have been picking up what I find in the woods and on the roads, and have quite a collection of skulls and skins and feathers. Mammals, reptiles, birds, and fish. We look through the stuff when they visit. This was on Saturday and Jonas wandered into my office and came back with the skunk skin as a hat and a smirk. (Once before he’d said to me: “I tricked you.”) His brother put on my bobcat (roadkill) skin. Later, we went with their parents to the beach, while these two studied the tidepools and found things I’d never have seen. They were like two walking microscopes. Hey Lloyd, look at this tiny eel. Hey Lloyd, look at this (sea urchin). Hey Lloyd….They have a pure wonder of the Natural World.

One Response to The Plichta Tricksters