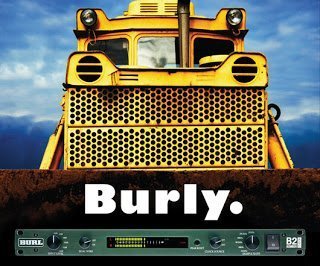 Our son Will, a musician, is working for Burl Audio in Santa Cruz. They make recording devices that (as I understand it), allow musicians to bring some old school sound into digital recording. Will says that there’s a warmth to vinyl records that you don’t get with straight digital processes.

Keith Richards, in his (v. good) autobiography, wrote about how the Rolling Stones could get all kinds of effects using a tape deck that cannot be done digitally these days.

I think Burl is on the right track. In many areas these days, people are trying to figure out how to hold on to soul in an increasingly digitized world. It’s not so much that “…the old is new again,” but that the old is being re-examined to determine which of its qualities can be retained.

From Rich Williams, Burl engineer/meister: “I am in essence heavily analog leaning, because I believe that is where the true SOUL of the music resides. We have Studer’s here in our studio, Paradise Recording, that we love, and we spin vinyl, but we also realize where the modern recording industry is. Digital is a great media for “fingerprinting”, manipulating and synthesizing music, but to me, the world is analog and our souls are analog. Burl audio is here to bring the SOUL POWER back to music, and the Mothership is our method.”

The Mothership is their hot item: https://www.burlaudio.com/products/b80-mothership

As I write this I’m listening to a record on the turntable: “Billy Joe Shaver.”

“I got it all down to one movin’ part

And that movin’ part is me…”

2 Responses to Bringing the Vinyl Sound Back to Music