Yogan, a highly creative French carpenter, has been in our last three books. Here is his latest creation, about which he wrote:

This is a 2002 Mercedes 311cdi Sprinter double-cabin (7 seats) truck with a hydraulic bed lift. I call it Le Benne-Benz. I wanted the 7-seater because we live in collective and it’s cool to go to festivals in only one vehicle! All the stuff (tent, mattress, etc.) is in the truck and there’s only one driver! It’s also good for a hot tub and a good stage for a concert!

I travel a lot, so I had to make a place to sleep and live during my travels. The idea to make a removable cell came to me because I like to sleep under the stars, and sunbathe nude, so the open roof was mandatory!

I have a big lifting frame in the forest where I suspend it, and it’s possible to sleep inside while it’s suspended (off the truck) like a big swing seat!

I travel with “Sucette,” my cat, and under my bed I have space to put my paraglider, my longboard, my accordions, and a lot of Cabanophiles books to sell during my travels.

This structure cost me less than 300 Euros!

I can level the bed with the hydraulic lift, which means I can find a lot more good camping spots! 50° max!

To use a van with a camper shell is a good way to be “unruly” because now in France its illegal to make your own rolling home. With this technique you can be so creative! I like to be unruly in this world; we need to be creative and have fun!

I will put Le Benne-Benz in my next book Cabanophiles II, in 2 years!

Note: Yogan published a book about his travels called Cabinophiles (for which I wrote the intro). It’s in French, but he’s translating it into English. www.cabanophiles.com

Here is more info on his Mercedes: yogan.over-blog.com/2018/08/dans-mon-benne-benne-benz.html

Finally, here is Yogan and his pal Menthe visiting Shelter two years ago: 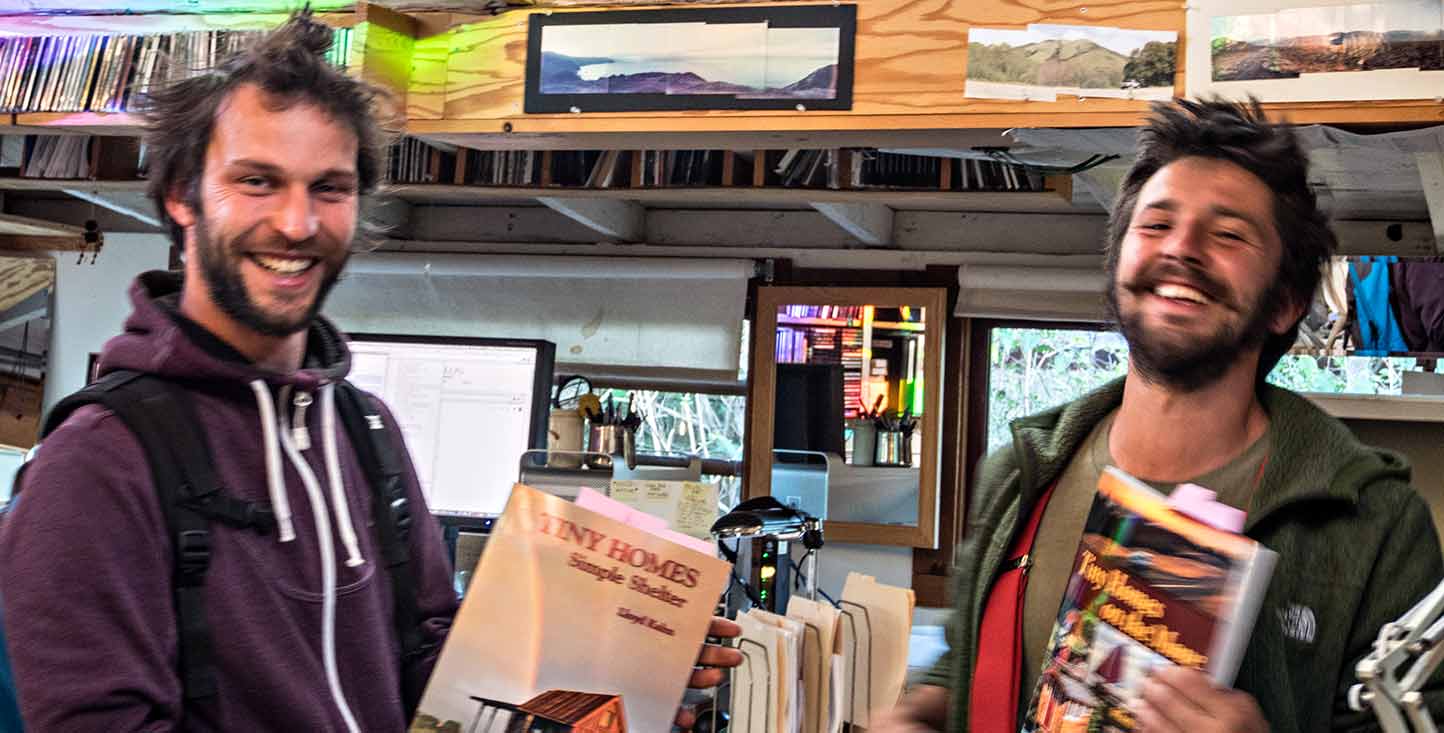 From our pal Deek:

A little backstory on this one: It’s a full-time dwelling that I led the build on for a friend (Alex Eaves: re-use advocate / filmmaker / co‑builder) in 2017. The goal was to create a mobile tiny home (decor and all) with a large percentage of discarded, salvaged, and dumpster-dived materials (over 80% easily). The final decor and construction budget was under $800 as a result. This doesn’t factor in the cost of the secondhand truck (around $8k).

The 17′ “box” of this former U-Haul moving truck now contains two sleeping levels, a small kitchen, a work-desk area, and even a nautical-style wet bath (toilet and shower stall). It will be featured in a documentary film we have been working on that will show the design process and educate “how,” from start to finish. People can head to BoxTruckFilm.com for more information.

(This is a great website; also, see Deek’s work at relaxshacks.blogspot.com.

This 20′ vardo is off-grid ready. Solar panels run a high-efficiency solar refrigerator and 12-volt lighting. The wood-fired heater heats 14 gallons of hot water while it heats your home. A propane stove and oven additionally warm this tiny home when you make tea or bake.

Our neighbor Todd Beeson getting ready for opening day. His truck is unique: a 1957 Chevy 2-ton Apache that he completely rebuilt. It’s got a chain-driven winch that operates off the boom. It looks like it might be a good crab (Dungeness) season this year.

Scanned from an old postcard

I stopped by Jay Nelson‘s house in San Francisco Wednesday on my way to Santa Cruz (to check out the sliding doors on his shop — for the sliding doors I’m about to build on my curved-roof shed), and this was parked out in front. The body is made of wood, and there’s a copper roof which lifts up.

The vehicle is a Subaru Brat (which, in Subaru-ese) stands for  “Bi-drive Recreational All-terrain Transporter.” 4-wheel drive.

“The BRAT came with one engine at launch, a 1.6-liter flat four mated to either a four-speed manual or three-speed automatic transmission. Two trim levels were offered, DL and GL. The GL had four headlights, the the DL had two. In 1981 displacement was raised to 1.8 liters while power grew from 67 hp to a whopping 73. In 1983 an optional turbo engine was offered with 93 angry Japanese ponies. Early models had a single-range transfer case; later models came with a dual-range unit. The strange Subaru Baja eventually came to continue the legacy, but only 30,000 were sold in the four years (2003-2006) it was produced.”

We are doing a new book, Hit the Road, Jack: Adventure Rigs, and Jay’s unique vehicles will be featured, along with those of Mike Basich and other creative builders.

Note: if you have anything to contribute, or know of cool road rigs, contact evan@shelterpub.com.

I shot this in San José del Cabo about 10 years ago.

This is in the Wells Fargo headquarters in downtown San Francisco.

Wells Fargo began in San Francisco during the gold rush. It acted as a bank and delivery service for miners looking to strike literal gold.

It cost quite a lot of money to transport goods before railroads. In 1867, it would have cost $300 — $7,352 in 2015 dollars — to ride the stagecoach from Sacramento to Omaha, according to an advertisement from the era.

Wells Fargo was able to transfer money and goods quickly and reliably using the stagecoaches. The bank claims that its coaches were made using only the finest materials of the time.

The main builder of these stagecoaches, Abbot & Downing Co., hand assembled the coaches from a variety of woods and rimmed the wheels with iron. It created a suspension system of leather to make the ride more comfortable for passengers crossing deserts and mountains.…

When workers were done with the stagecoaches, they would weigh 2,500 pounds, about as much as a 2016 Toyota Prius C.

The stagecoaches covered 3,000 miles from the West Coast to Nebraska. Once railroads spanning the width of the country were introduced in 1869, stagecoaches began falling out of fashion. They continued serving areas not reachable by rail after that, and Wells Fargo spun off its delivery company in 1905.…

Matty Goldberg and I took the Wall Street ferry to Red Hook (Brooklyn); It was about 85 degrees. We wandered around for a while, then got some cold drinks and sat on a door stoop, talking about publishing, books, and printing. We spotted this  Lincoln, which has been identified by a car aficionado (see Maui Surfer’s comment) as a 1957 Lincoln Premiere.