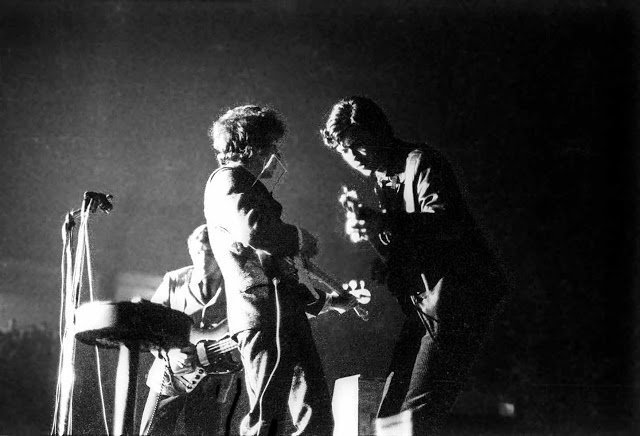 I hitchhiked across the USA in Fall, 1965, to figure out what I wanted to do with my life. I was an insurance broker in San Francisco, and the ’60s were exploding around me. I had smoked pot — at age 28. (Think about it — 28 years before encountering alternate universes.)

On my way back to NYC from visiting my cousin Mike in Provincetown, I got picked up by some students from The Rhode Island School of Design. They said I could crash at their loft in Providence, Rhode Island, and they were going to a Bob Dylan concert that night, did I want to go?

$3.50 to get in and I told the cops I was a newspaper reporter, and I got to roam in front of the stage.

Black and white Tri-X film on a Nikon. I didn’t know much about Dylan. I was a Beatles and Stones fan. The first half was solo acoustic folk music. The second half was rock and roll! A lot of folkie fans walked out at intermission, but I had stumbled into the early part of Dylan’s 2 years of brilliance.

I looked at the photos 40 years later. Jeez, that’s Robbie Robertson! I ain’t gonna work on Maggie’s farm no more…

What is this? Holy shit!

I’ve just been looking at these photos, after they’ve been 42 years in the archives.

I came back to San Francisco and quit my job and went to work as a carpenter — 1965.

All this to preface:

1. I’m recuperating from almost a month on the road.

2. I’m working on a book of the ’60s, from my own point of view. I’m a native San Franciscan, went to high school in Haight Ashbury district, was 10 years older than the movers and shakers of the cultural revolution. I had a quite different experience in the ’60s than I see talked about in the media regarding the — ugh — Summer of Love. I’m still in the stages of seeing if the book is going to work.

A new octave coming up.

See ya when I can see see ya…

8 Responses to Something Happened Here, But You Still Don’t Know What It Is, Do You Mr Jones?

The brilliance of #chickens. Amongst other skills, they eat every grain of leftover rice, every apple peel, every bit of spoiled cheese — and volia — they it all turn into eggs (and meat).
Lotus in NYC Last Week