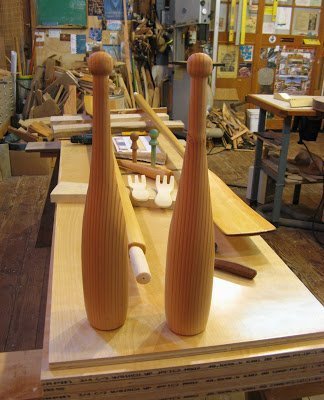 “Lloyd, I was trying to figure out what to make my son for Christmas, and saw your post on Indian Clubs. Off I went on Google….and what a discovery! If Amazon’s sold out, then I’m gonna make some! I got digging in the lumber pile this morning and found some dry Douglas Fir 4×4, and had this pair of 2 pounders buffed up by mid-afternoon. The big challenge in turning these is to make the second one exactly like the first.

I’ve been doing a bit of boogie with them to the shop radio , make sure there’s swinging room for sure, and I feel ENERGIZED! Maybe I should read the operator’s manual?

Behind the clubs on Santa’s workbench you can see a new pair of Xantho-cypress salad forks, some 90″ Sitka spoon oars ready for collars, and a couple of experimental Yuloh pivots for the catboat, one Locust and one Rock Maple dipped in cuprinol. Godfrey will know what that’s all about.

(David is one of the featured builders in Builders Of the Pacific Coast.)

Lloyd Kahn started building his own home in the early '60s and went on to publish books showing homeowners how they could build their own homes with their own hands. He got his start in publishing by working as the shelter editor of the Whole Earth Catalog with Stewart Brand in the late '60s. He has since authored six highly-graphic books on homemade building, all of which are interrelated. The books, "The Shelter Library Of Building Books," include Shelter, Shelter II (1978), Home Work (2004), Builders of the Pacific Coast (2008), Tiny Homes (2012), and Tiny Homes on the Move (2014). Lloyd operates from Northern California studio built of recycled lumber, set in the midst of a vegetable garden, and hooked into the world via five Mac computers. You can check out videos (one with over 450,000 views) on Lloyd by doing a search on YouTube:
View all posts by Lloyd Kahn »
Tags: builders, carpentry, crafts, woodwork