Caught 2 eels Friday, plus these nice little rock crabs (with 20′-long bamboo poke pole). Then I got a 10-lb. salmon from local fisherman (who says there are salmon up and down the coast right now—yahoo!). I smoked salmon and eels.

Went surfing Saturday, too many people for me. That’s one thing that really was good about the ’50s: uncrowded waves. Think 8 feet and glassy at Steamer Lane, 4 of us out. (Oh I gotta stop this!) So I did a lot of paddling Saturday, working on shoulder(s) rehab. It’s always a plus to get in the ocean, in any manner. Surfing, paddling, swimming, diving…super energy gain. 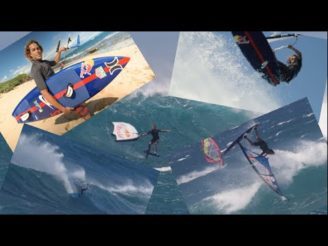 Kai Lenny Ripping with 4 Wind Sports in One Day