I tell ya, when I get on my new bike, it feels like I’m on a motorcycle. Each time I take the first couple of cranks going down the road, I can’t believe how good it feels. Here we go! Yesterday I headed up the coast off-road. The bike with its air shocks takes potholes and rocks with ease. Surf was up, tide low, air filled with sweet negative-ion-charged sea air.

Then I rode out to a secret pond in the hills, where swimming is great in the Spring: 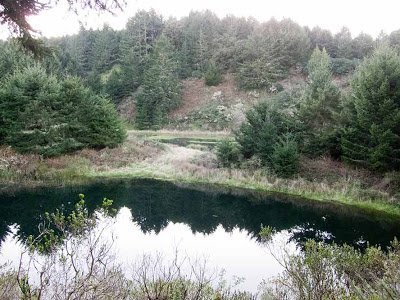 On the way home as sun was setting, here was a herd of 14 deer. Never seen a flock like this. 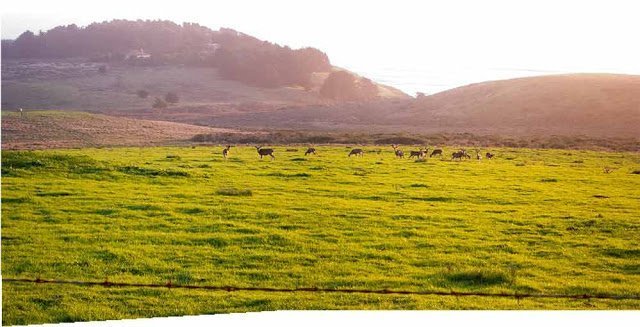 Each day of my life right now seems so filled with interesting stuff I can only get a fraction of it down.

Lloyd Kahn started building his own home in the early '60s and went on to publish books showing homeowners how they could build their own homes with their own hands. He got his start in publishing by working as the shelter editor of the Whole Earth Catalog with Stewart Brand in the late '60s. He has since authored six highly-graphic books on homemade building, all of which are interrelated. The books, "The Shelter Library Of Building Books," include Shelter, Shelter II (1978), Home Work (2004), Builders of the Pacific Coast (2008), Tiny Homes (2012), and Tiny Homes on the Move (2014). Lloyd operates from Northern California studio built of recycled lumber, set in the midst of a vegetable garden, and hooked into the world via five Mac computers. You can check out videos (one with over 450,000 views) on Lloyd by doing a search on YouTube:
View all posts by Lloyd Kahn »
Tags: bikes, nature, ocean