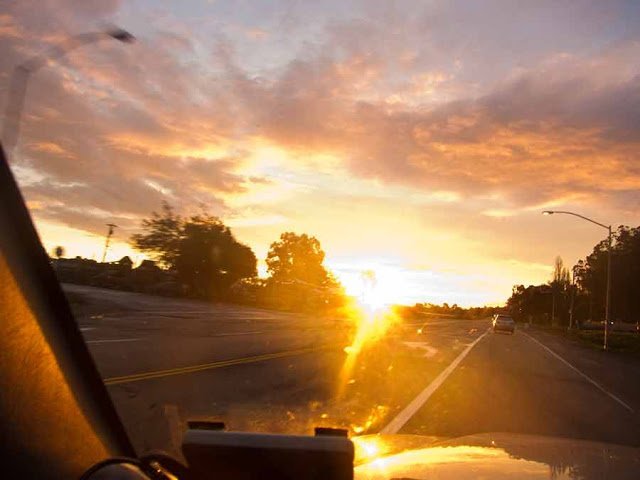 When I see a red sky at either dawn (as above, last Tuesday) or dusk, I always think of this saying, which I originally heard from Lionel, the fisherman. So I looked it up on Google and found the below on the Library of Congress website:

Question: Is the old adage “Red sky at night, sailor’s delight. Red sky in morning, sailor’s warning” true, or is it just an old wives’ tale?

Answer: Within limits, there is truth in this saying.…

Shakespeare…said something similar in his play, Venus and Adonis. “Like a red morn that ever yet betokened, Wreck to the seaman, tempest to the field, Sorrow to the shepherds, woe unto the birds, Gusts and foul flaws to herdmen and to herds.”

Weather lore has been around since people needed to predict the weather and plan their activities. Sailors and farmers relied on it to navigate ships and plant crops.

But can weather lore truly predict the weather or seasons?

Weather lore concerning the appearance of the sky, the conditions of the atmosphere, the type or movement of the clouds, and the direction of the winds may have a scientific basis and likely can predict the weather.

In order to understand why “Red sky at night, sailor’s delight. Red sky in morning, sailor’s warning” can predict the weather, we must understand more about weather and the colors in the sky.

Usually, weather moves from west to east, blown by the westerly trade winds. This means storm systems generally move in from the West.

During sunrise and sunset the sun is low in the sky, and it transmits light through the thickest part of the atmosphere. A red sky suggests an atmosphere loaded with dust and moisture particles. We see the red, because red wavelengths (the longest in the color spectrum) are breaking through the atmosphere. The shorter wavelengths, such as blue, are scattered and broken up.

When we see a red sky at night, this means that the setting sun is sending its light through a high concentration of dust particles. This usually indicates high pressure and stable air coming in from the west. Basically good weather will follow.

A red sunrise reflects the dust particles of a system that has just passed from the west. This indicates that a storm system may be moving to the east. If the morning sky is a deep fiery red, it means a high water content in the atmosphere. So, rain is on its way.

Lloyd Kahn started building his own home in the early '60s and went on to publish books showing homeowners how they could build their own homes with their own hands. He got his start in publishing by working as the shelter editor of the Whole Earth Catalog with Stewart Brand in the late '60s. He has since authored six highly-graphic books on homemade building, all of which are interrelated. The books, "The Shelter Library Of Building Books," include Shelter, Shelter II (1978), Home Work (2004), Builders of the Pacific Coast (2008), Tiny Homes (2012), and Tiny Homes on the Move (2014). Lloyd operates from Northern California studio built of recycled lumber, set in the midst of a vegetable garden, and hooked into the world via five Mac computers. You can check out videos (one with over 450,000 views) on Lloyd by doing a search on YouTube:
View all posts by Lloyd Kahn »
Tags: fishing, nature, ocean

Concrete pour in the hood 2 hours ago
My new bike