I was on Isla Grande, a very small island off the Caribbean coast of Panama without an internet connection for 4 days, wrote the below from the island, and am posting these from Bocas del Toro (a Panamanian island close to the Costa Rica border on Monday (on which, more to come):

Thursday — I love the good big cities — exciting and inspiring, but after about 5 days I need country air. (Surfer Stu, who doesn’t love cities, told me the other day that he’s a “country slicker.”) I got up at 5 this morning and caught the trans-Panana train, which runs from the Pacific {Panama City) to the Caribbean (Colon). From there I got two buses way out to a little port town and then 20-foot-long fiberglas boat like a Mexican panga) powered by 15 hp outboard to a small island off the coast, Isla Grande.

Below, view from my deck hammock

Below that, one of the many island boats for ferrying passengers back and forth. Nada es Etorno (Nothing is Eternal). So true.

I found a funky room in a quirky hotel with deck and hammock practically hanging out over crashing waves. I’m absolutely in heaven. I’m going back and forth from the hammock to wandering with camera. There are 300 black people on the island, English-speaking West Indies descendants like Jamacians and Triniadians. There’s a Bob Marley open air nightclub, and the place is full of whimsical architecture and gardens. A bunch of Watts Towers type seashell and tile mosaics. The island is filled with tall coconut trees. 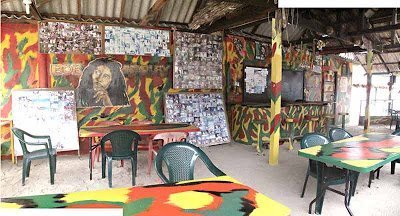 Friday — Dinner last night at the Congo Cafe, a bar/restaurant with thatched roof and beachcomber deco set on a pier over the water. Squid cooked in creole coconut milk, rice, a Balboa beer. 5 locals were there watching grainy TV show from Mexico. I was the only customer.

It started blowing last night and by this morning a full-blown storm hit. Sheets of water. Ocean has gone from green to grey, big waves, wind howling. Air is warm! I’d forgotten about the Caribbean. It’s green and lusty and exotic, beaches with black sand, waves that come out of nowhere. It’s more passionate than the Pacific, more gutsy, soulful.

Sunday — Isla Grande is about a mile across by maybe 2 miles long. No roads, not one motor vehicle. There’s a slippery rocky path along the shore from my hotel into town, and it’s been getting battered by waves the last few days. By now a certain amount of reality has set in. There’s a fair amount of garbage on the beaches and trails. And with many of the black people, there’s an edge. They’re not jumping through hoops for tourists. Like the Kuna Indians of nearby islands who have been resisting the exploitative incursions of gringos for 500 years. No video cameras; you pay them for each photo you shoot. My friend Leo told me that over 40 years ago, when he landed on the San Blas Islands, the Indians wouldn’t let him and others get off their boat.

Right, below: chapel on the ocean in Isla Grande. Now here’s a church I can go for. No priests, no sermons, no dogma, no guilt. Hallowed be thy essence, oh mighty Ocean

I found an immaculate little restaurant on the edge of town, El Nido Postre, and the chef, Olga Ehrens, is a native Tica who studied cooking in France and Spain. I had breakfast once and two dinners there and they were extraordinary. The kind of cook where you say, bring me whatever you want.

From where I live, it’s 3000 miles to get from one ocean to another. In Panama it’s less than 50 miles. Found a white-sand beach at sunset last night, went swimming. In the warm water I’m relaxed and swimming with more power. The foam was like whipped cream.